What is the Difference Between NSDL and CDSL 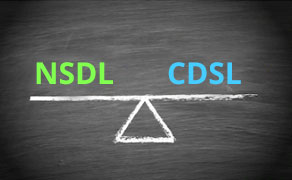 Both these depositories handle the business coming from the two marquee stock exchanges in India, the NSE and the BSE, that is the National Stock Exchange and the Bombay Stock Exchange.

The two depositories work in the same manner that banks work for cash and fixed deposits. Just like an individual invests his cash at a saving account in a bank instead of stuffing it in a safe back home, in the same manner, your shares are held in a dematerialised form with the depositories.

The demat account used by investors is only an intermediary to help facilitate everyday trading for retail investors. Otherwise, it is the depositories NSDL and CDSL that actually hold the shares for investors.

Additionally, CDSL and NSDL come into the picture when companies are looking to distribute dividends to their investors. Companies can remit the dividend to their shareholders only when they have all the information concerning them. This is where the depositories play a strategic role. In the earlier days, when shares were sold or purchased, the share certificates had to be transferred. Now with procedures being digitised share selling or purchasing is electronically recorded and a transfer is effected between two demat accounts.

It is clear that the NSDL and CDSL difference is not that stark.

1. There are no costs levied by the depository CDSL when you open a demat account with a depository participant.

2. CDSL’s easi or electronic access to securities information has been kickstarted by the depository to help investors secure access to their demat holdings in an electronic format anytime, anywhere. Investors and other clearing members can also use the easi portal to check their transactions from the CDSL website itself.

3. One can also keep an eye on multiple demat accounts from the CDSL website itself.

4. One can also continue to monitor corporate announcements pertaining to the shares and securities held by them.

Related Articles: A Step By Step Guide to Registering with CDSL Easiest | NSDL Demat Account: Beginner's Guide | Amendments to Business Rules of NSDL - OTP for off-market transfer | How to Open a Demat Account Without a Broker | Factors to Keep in Mind While Opening a Demat account