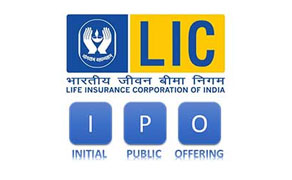 The government of India is looking to list the upcoming LIC IPO on domestic bourses in the January-March quarter of the current fiscal year. The LIC IPO will contribute a significant chunk to the government's budgeted disinvestment target of Rs. 2.10 lakh crore this fiscal year. The upcoming LIC IPO comes at a time when the government’s plans to divest its stake in Air India, BPCL and Concor have been put on the back burner due to the COVID-19 pandemic. In fact, the bid invitation deadlines for Air India and BPCL have been pushed back twice this fiscal year.

In India, there are 24 life insurers currently in operation, with LIC commanding the top spot with a market share of 69% in FY20. During this fiscal year alone, LIC had collected first-year premiums of Rs. 1.78 trillion – 25.17% higher than that of the previous year’s Rs. 1.42 trillion, according to the Insurance Regulatory and Development Authority of India. It is also worth noting that LIC, in which the government of India holds a 95% stake, has assets worth Rs. 34 trillion.

With the banking sector in India going through a difficult phase due to the ongoing COVID-19 pandemic and issues related to asset quality, the timing of an IPO as large as the LIC IPO could not be more interesting. The listing of such a prominent company such as the LIC can help the BFSI sector regain its weight in the indices and attract a large number of retail and institutional investors.

The LIC IPO date has not been announced as of yet. That said, according to the government of India, the LIC IPO is slated to open up for subscription sometime during the second half of this fiscal year. Unfortunately, the upcoming LIC IPO had to witness several roadblocks in the form of the COVID-19 pandemic.

However, with the recent appointment of Edelweiss Financial Services Limited and Deloitte as pre-IPO advisors, the process has started to pick up some speed. If all the parties involved work in tandem and at full speed to get the requisite approvals from the regulators and finalize the LIC IPO, we might just see the shares of the insurance company listed on the bourses before the end of this financial year.

The government of India is likely to dilute not more than 10% of its entire stake in LIC. According to the estimates made by various analysts, the size of the upcoming LIC IPO would range somewhere between Rs. 70,000 crores to Rs. 1 lakh crores. However, the Finance Ministry, during the budget presentation, stated that the government was expecting to raise up to Rs. 90,000 crores through the stake sale of LIC and IDBI Bank. Under such circumstances, the LIC IPO size may not touch the magical Rs. 1 lakh crores and would perhaps be restricted to somewhere between Rs. 70,000 crores and Rs. 80,000 crores. That said, the official estimate of the LIC IPO size still remains to be announced.

What are the advantages of the upcoming LIC IPO?

The LIC IPO has many upsides. Here’s a preview.

- The IPO would allow retail individual investors to take part in the wealth creation process of LIC.

- The LIC IPO would bring about greater levels of transparency in the operations and governance of insurers.

- The IPO would bolster the BFSI sector and attract more foreign investment.

- Since the stake sale is not more than 10%, the government would still retain full control over the operations of LIC.

What are the steps to take to invest in the LIC IPO?

Investing in the LIC IPO is easy. Here are the steps you should follow.

- Firstly, log into your online trading from your preferred web browser using your credentials.

- Choose the IPO that you wish to invest in and click on the ‘Place Order’ button.

- Enter the bid details and click on the ‘Confirm Order’ button.

- You will be asked to either confirm your bid or modify it.

Open Demat account with us now to invest in the LIC IPO.

How will the LIC IPO impact the employees?

The IPO is likely to come with a special reservation portion for its employees. This would allow the employees of the company to invest in the upcoming LIC IPO.

How will the LIC IPO impact the existing policyholders?

The LIC IPO would not have any impact on the existing policyholders at all.

Will the LIC IPO benefit the existing policyholders?

Related Blogs: LIC IPO - Company Profile |  LIC IPO - What You Should Know Before The Launch | LIC IPO - How to apply for LIC IPO with Motilal Oswal | What's the big deal about IPOs? | 7 factors that can contribute to a successful IPO | IPO in India- The future looks bright